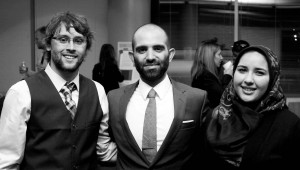 The annual Rocky Mountain Region Public Health Case Competition, previously open only to students of University of Colorado (CU) Anschutz Medical Campus, has expanded. This year, the event opened up to students of Colorado School of Public Health campuses, CU’s School of Public Affairs, and School of Architecture and Planning…and most importantly, students from RVUCOM! Participants were placed into groups and given a case to “solve” based around this year’s theme of “Healthy Aging.” On the first day, they researched and brainstormed; on the second day, they presented their solutions.

Out of approximately 90 students, two RVU students and their groups placed in the competition. Nima Beheshti, OMS-I, and his team won second place for their presentation, “Silver Connections: Bridging the Gap Between Aging and Independence.” Each member of the team received a $500 scholarship. Matthew Albright, OMS-I, and his team won third place for their presentation, “The TIME Study: Technology Increasing Independence using Medical Electronics.” Each member on this team received a $250 scholarship. Sohayla Rostami, OMS-II, also participated in the competition with her presentation, “GoTogether,” a proposal that describes solutions for transportation for the elderly. Additionally, as Matthew Moynihan, OMS-II, stated, “During the post-presentation Q&A with the judges, Sohayla answered [the questions] with unbelievable poise and intellect.”

Congratulations to each of our students’ accomplishments during the competition! (Photo courtesy of Colorado School of Public Health)

Receive Blog Posts in Your Inbox: